Belvie is a Belgian chocolate made … in Vietnam. According to the principle of “bean to bar”, its creator selects his own beans in the Mekong delta or on the Asian plateaus. We taste this scarcity in primeur. 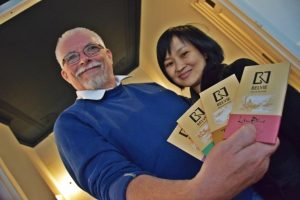 Marc Vanborren is surprised. With his Belvie chocolates, he is the only foreign chocolatier invited to the Salon du Chocolat in Brussels. “Stranger,” with a name in “van-“? Yes and not in fact: this Belgian born in Congo is just launching his Belvie tablets, the first 100% Belgian chocolate made in Vietnam. And 100% “bean to bar”, this anglo-saxon trend that assumes the production of chocolate “from the bean to the tablet”.

Declined in 4 shelves from 80gr to 70% cocoa, Belvie chocolates (for “Belgium” and “Vietnam”) embody fruity notes of blueberries and apricots, but also mint and lychees. We have tasted these creations in Belgian premiere with its producer, who succeeds in making a Belgian chocolate in short circuit. A challenge …

Marc Vanborren, how did you manage to launch your chocolate in Vietnam?

I started thinking about it two years ago. I was born and I lived in the Congo: the plantations are in my DNA. I traded mining equipment, worked in a foreign exchange office, held a furniture store in Brussels and even a fried pot in Russia. I lived 10 years in Dubai. But recently I fell in love with cocoa. I bought beans and tried in my kitchen. Then I took the plunge. And I settled in Vietnam.

How long has your factory been?

We started the plant in January 2016. And in five months we were ready to produce. In Vietnam, it is quite complicated to start because everything passes by the State, which must taste before granting the authorizations. But everything went well: we have very good relations. So you produce everything in Vietnam? From farm to tablet, yes! We do not work with cooperatives, but live with farmers. This allows us not to pay an intermediary but to pay the producer immediately, at prices higher than the requirements of fair trade. But our molds, our sugars and our packaging are also Vietnamese.

The “fair trade”, do not you believe?

The north-south exchange, I do not believe too much, no. Let’s say that all this is a story of communication and marketing. So, how can we understand that raw materials enter Europe without tax, whereas finished products, such as chocolate, have to pay? This is not helping the Third World! That’s why we prefer direct contact with farms.

Cocoa is expensive in Vietnam?

We pay $ 4 a kilo for $ 1 in Africa. Our tariffs are twice what Fair Trade requires. But you have to give these amounts, otherwise the farmers would grow grapefruit: grow cocoa or something else, they do not give a damn about it.

Where do your beans come from?

We supply ourselves in the Mekong Delta on the one hand and in the plateaus on the other. The very moist climate makes it possible to obtain a very typical cocoa. The process “bean to bar” also induces chocolates that can vary at the beginning or end of the season, such as wine. 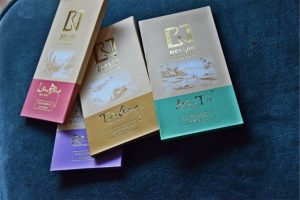 Belvie chocolate comes in 4 varieties grown in the Mekong Delta and on the plateaus of Vietnam. They all show 70% cocoa content. -EdA – Julien RENSONNET

Why this presence at the Salon du Chocolat de Tour & Taxis?

We respond to an invitation, after a presence on a French show. This visit is our first trip to Belgium, where our chocolates have never been tasted. I am also very proud to see no other “exotic” producer at the show. Our ambition is to make contacts, to find importers and distributors in different European countries.

I would like to raise the cocoa rate by 70% to 80%. But the whole science of the chocolate maker is there: make the cocoa rate rise by keeping chocolate edible. And then, I’d like to get a chocolate out of Vietnamese coffee. It would be called “good morning Vietnam”

We're not around right now. But you can send us an email and we'll get back to you, asap.